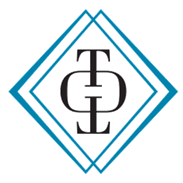 Why Do Men Love Cars

Even living with a mad car enthusiast for the bulk of my life and then spawning an even madder  ‘mini me’ (of him), the answers to this question still remain a mystery.  From a female perspective, the question is why do guys pay so much money for a hunk of metal that just takes them from A to B ?

Whilst some women are also as obsessed with cars, the percentage of men vs women in the car obsession department is askew. Men are inherently passionate about their cars. 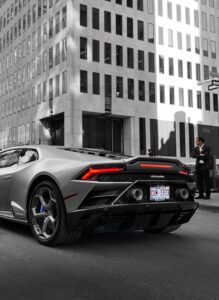 Women tend to think of their cars as a means to an end. In other words, it’s more of a convenience thing.

When a man owns a car it tends to take on certain “human” attributes. More than being just a practical item, it’s seen as having its own name, personality, quirks, needs and in most cases it becomes a gender. For a man, a car is considered to be a thing of beauty and power. Practical factors such as fuel efficiency and value take second place. Men are more interested in bottom end grunt, torque, horsepower, and curves.

Whilst women would opt to put all the safety kits available on their cars, men would actually remove the safety features of the car if they feel that they will look better aesthetically. And as if that’s not enough, they’ll spend thousands of dollars on customised kits, rims, and color schemes. Are you chuckling? Ofcourse you are, you know its true !

Once a car has a name, look out, here comes the emotional attachment. Now there’s the added responsibility of wanting to take care of it. That means keeping it safe and secure in the garage, spending hours each week cleaning and detailing it, and treating it to all those special accessories you know it ‘needs’.  Women, on the other hand, tend not to form such attachments, which means they can be very neglectful. That’s what men and servicing departments are for right ?!..lol 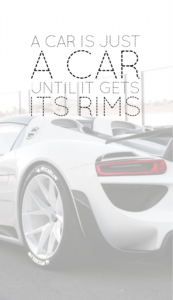 Self Expression / Extension of Themselves

There are a massive range of options when it comes to customising a car. So that standard car from the local dealer can be enhanced and modified by high-end rims, custom spoilers, lift kits, specialty shifters, tinted windows, custom paint jobs, exhausts etc providing their “baby” with their own personal touch. A bit like women with make-up and hair colour.

A study showed that driving is one of the many ways that men assert their masculinity. Quite often than not, when you see a couple in a car, its generally the guy driving. Unless she’s gone to pick him up and take his drunken-stupor arse home following a bender with the boys.

As well as power, cost and uniqueness, a vehicle can also be a good indicator of a man’s personal success. Owning a “good” car is a status symbol. For men, this proves that they’ve made it in life. An expensive car is the easiest way to tell a judgmental world that they are successful in their careers. This is why men are usually particular about the make and model of their cars. They also want faster cars even if they don’t necessarily want to drive fast.

Their cars are symbolic of their success and gives a man an increased sense of self-worth.

Boost In Self Esteem

A separate study showed that men get a boost in self-esteem when they own their first car. They associate car ownership with growing up and becoming independent. Buying their first car is an important milestone in their life. Interestingly enough the boost gets bigger in relation to the value of the car.

Though this may sound superficial, men also like to impress girls with their cars. They think that women want men who drive fast and sleek cars. But if truth be told, who wouldn’t love to be picked up in a matte black, lowered, window tinted, 16cyl thundering sports car, turning heads whilst pulling up at the valet parking of some swanky hotel. 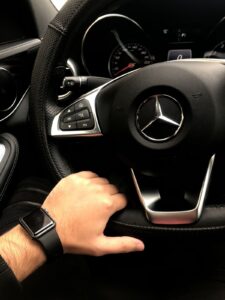 Driving is one form of relaxation therapy for men. A study undertaken by BMW found that men were most relaxed when sitting behind the wheel. The reason? They felt they had nothing to prove. Put a man in the driving seat and it’s just him and the road ahead to think about. There’s no pressure, criticism, or stress. So ladies if your man is stressed, don’t hand him a sandwich or offer an ear, hand him a steering wheel.

Aside from relaxation, time spent behind the wheel on either doing a few quick laps around the neighbourhood or taking to an open road allows time to unravel a particular problem, contemplate a few of life’s mysteries or allow thinking time to productively solve any problems.

Ask any guy you know whether they’d prefer a tiny commuter 4cyl sedan or a power enhanced V10 engine that pumps out a massive 602 horsepower car that’s a smooth responsive powertrain with plenty of oomph and you know what the answer will be. However, this may be a reconsideration given current petrol prices !

An Appreciation of Mechanical Engineering

Whilst most men may appreciate a twin-turbo that can do 0-60 in an insane 1.3 seconds, some men just have an appreciation of the mechanics behind a piece of machinery and find the cogs that make things tick fascinating. I mean who doesn’t find the combustion chamber in an engine the most magical place under the bonnet. How fuel, air, pressure, and electricity come together to create the small explosion that moves the car’s pistons up and down, thus creating the power to move the vehicle – absolutely riveting and ingenious.

Quote : If you think nobody cares if you’re alive, try missing a couple of car payments